The Glorious Ones
February 22-24 and March 1-3 at 7:30 p.m.
Adults $12
Students $10
​
​Both slapstick and serious, the musical tells how the troupe came to be and how it captured the public's adoration with its bawdy comedy... before changing artistic fashion altered its way of life. It follows seven archetypal characters – the charismatic leading man, the sly harlequin, the quack doctor, the old miser, the voluptuous leading lady, the devoted dwarf and the elegant Moon Woman – as they search for immortality and love. In their search for glory and fame, the characters are thrown out of France by the religious court because of their "lewd" performances. The leading man, Flaminio, struggles with the court's decision and how it affects his life as a performer.
​
Smutty and nutty, yet sentimental and deeply moving, The Glorious Ones has "one hand on the crotch, and one hand on the heart."

This show contains some adult content, and would be rated PG-13. 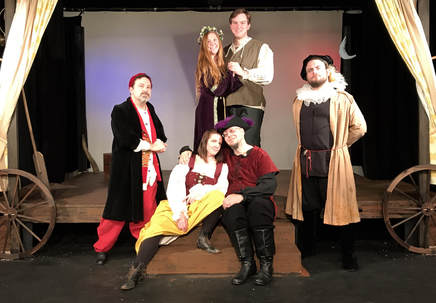