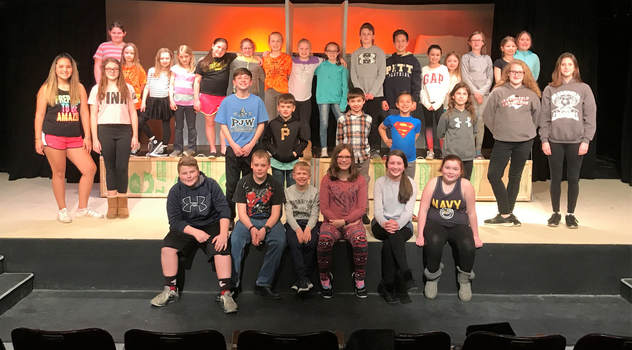 Buy Madagascar Tickets
The Clearfield Arts Studio Theatre, Inc. (CAST) invites community members to escape the “zoo” of life in Clearfield and join them on a transatlantic musical adventure when its students perform DreamWorks Madagascar – A Musical Adventure JR. beginning April 19.  Based on the DreamWorks Animation Motion Picture, the show follows a group of Central Park Zoo animals who are unexpectedly shipped to Africa.


Madagascar Jr. follows four friends who are thrust into an exciting, high-stakes, international adventure at the very moment in which they start to imagine the possibilities beyond the safe environment in which they live.

The CAST students are on a similar journey.  They are experimenting with new skill sets as they venture into new territory personally and creatively, and they are forming new friendships through the shared experience of collaborating on this show.

As the show opens we learn that Marty the zebra may be celebrating his tenth birthday at the Central Park Zoo with his friends Alex the lion, Gloria the hippo, and Melman the giraffe, yet he longs to experience life outside of the zoo’s walls. When Marty eventually escapes, his animal friends from the zoo pursue him into New York City. After reuniting, the animals are chased by the police, and ultimately felled by tranquilizer darts. They awake, trapped in crates, on a ship, which – through a series of events – is thrown off course.  Upon reaching land the animals discover they have been shipwrecked on the island of Madagascar.  Ultimately, it is only in being so lost that they can begin to discover where they really belong.

This production is directed by Steve Albert, with Lisa Gormont serving as assistant director and stage manager.  Music director is Mason Strouse, with Misti Bruner as the choreographer.  Countless parent helpers, CAST board members, and other volunteers are bringing this show to life for the youth of our area.  CAST would like to thank these people.

CAST is a nonprofit arts center located at 112 E Locust Street in the heart of Downtown Clearfield, PA.

We had 57 students audition and had to select approximately 30. Everyone was VERY talented and made our job VERY difficult.
Congratulations to those who received parts. And to those who didn’t, we look forward to seeing you again in our next kid’s show, at our Seeds of Art Summer Camp, and at one of our many family friendly events.