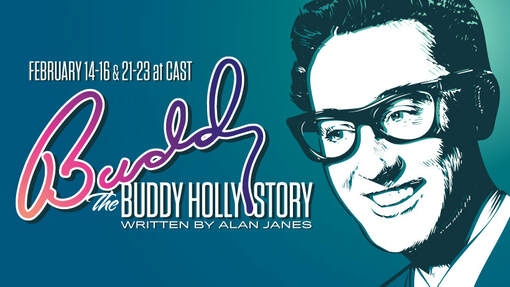 CAST is hosting a special fundraiser performance of The Buddy Holly Story to raise funds for capital improvements.  If you are ordering season tickets you may also pre-order tickets for this show.  You will enjoy the same seat for this added production as you would the rest of the season.  This is a special offer for only our season ticket holders.

This show tells the true story of Buddy’s meteoric rise to fame, from the moment in 1957 when ‘That’ll Be the Day’ hit the airwaves until his tragic death less than two years later on “The Day the Music Died.  The incredible legacy of the young man with glasses, whose musical career spanned an all-too-brief period during the golden years of rock and roll, lives on in this one-of-a-kind musical.

The Buddy Holly Story was first brought to Clearfield in 2017 at CAST.  All performances sold out in record time, and additional performances were added, selling out in less than 24 hours.  CAST was contacted by the London producers of this shows to take part in the special world-wide celebration of 60 years since the "Day the Music Died" and 30 years since the musical hit the stage.
SPONSORED BY